Today is the anniversary of a great artistic and cultural loss, yet one that was sadly barely noticed at the time. On January 15, 1994, Harry Nilsson died in his sleep from a heart attack at age 54. By the time he passed, Harry had slipped nearly completely off the pop-culture radar, but even when he was a very high-profile recording artist, it was still hard to determine exactly who he really was. Nilsson always seemed the positive epitome of what the Rolling Stones like to negatively call Mick Jagger behind his back: “He’s a great bunch of guys.”

But with Harry, that is truly a compliment, and by all accounts he would have had it no other way. If ever there was an artist impossible to pigeon-hole or define in a pithy, one-sentence description, it was Harry Nilsson. I won’t even attempt that here; I’ll just say this is the first of many Wires I will write in tribute to my favorite singer and pop-culture mystery wrapped in an enigma wrapped in a riddle. Hopefully, after 20 or 30 of these, we will begin to understand the creative and personal breadth of the man known as “The American Beatle.” 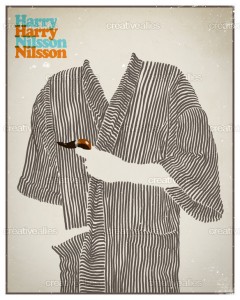 And I’m just getting started. Harry Nilsson is just one of the most interesting people of the 20th century, and his musical oeuvre is simply one of the most exceptional and singular in all of modern music. This focus will probably take years, and I am looking forward to every brandy alexander-soaked minute of it.

Let’s begin with what is likely your first memory of Nilsson, a beloved television theme that is at once a piece of vivid nostalgia, timeless melody, unique vocal performance, and probably the best ode to fathers and sons ever recorded (with a tip of the turban to Cat Stevens).

“The Courtship of Eddie’s Father” was a popular American sitcom that aired from 1969-1972. Bill Bixby—fresh off “My Favorite Martian”—played the dad, a widower with a young son, played by Brandon Cruz. Based on a 1963 movie with the same title, the conceit of the show involved the son’s attempts to unite his father with a new wife, so he can likewise have a new mom. The heart of the show involved the lessons they learned going through life, and, in a sense, growing up together, after they both suffered a terrible loss.

Nilsson’s theme for the show, “Best Friend,” is 55 seconds of pure joy, 60’s sunshine, familial love, and child-like whimsy. Numerous demos of the song exist—many under an earlier title, “Girlfriend.”—and though it was indeed fleshed out into a full song, Nilsson never recorded it again after he created this television theme. He seemed to sense that this was the definitive version, and I agree. It couldn’t get any better than this.

I should probably leave it at that, but I can’t resist. Here’s one you probably have never seen/heard, and I think you’re going to like it a lot.

In 1968, around the time Harry was composing “Best Friend,” he contributed the songs and score for the ill-fated Otto Preminger film, Skidoo, which starred, among many others, Jackie Gleason, Carol Channing, Frankie Avalon, and Groucho Marx as God in his final film appearance. Skidoo was a horrendous flop, effectively ending the screen careers of a couple dozen well-known actors, but it contains a most curious, and never again attempted, element, courtesy of the Mad Harry. At the end of Skidoo, Nilsson sings the credits for the film. The entire credits. Yes, you heard correctly. 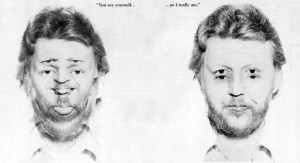 Nilsson appears in the film as well, playing a prison tower guard on acid, which he achieved by getting stinking drunk and acting like Stan Laurel. Yeah, the movie is that bad. But the credit sequence? Absolutely fucking brilliant.

And, before we go, just because, here’s Harry at the LA Forum sinking a bucket from half court (something that he could apparently do with amazing consistency, and on more-or-less any drug or alcohol imaginable). Filmed as a short television promo for the 1975 album Duit on Mon Dei, this 20 second clip also features Ringo Starr, the sole spectator, clapping at the end.

And, we’ve only just begun. See you next album, Harry!