An 80s audio celebration of the Music Video Generation on Mixcloud and soundwavesTV.com

By focusing on this influential era of music, Soundwaves FM will give fans new context and insights into the music, people and impact of the video generation. Soundwaves FM will feature the music of 80s pop and rock icons such as Van Halen, Devo, Blondie, Duran Duran, Cyndi Lauper, Huey Lewis and the News, and hits spanning the era, as well as deep cuts, rare extended mixes and live tracks.

They’re back!  Soundwaves creator and host Dennis Willis and host Steven Kirk have lead the fan party for music lovers in the San Francisco Bay Area for decades, allowing music fans to connect with the hits and get the background on their favorite artists.  They are evangelists for the 80s music video generation and are dedicated to keeping 80s fans united and helping to introduce the music and culture to new generations of music fans.

Willis admits that he and Kirk are having a blast. “This really takes us back to the beginning, when the show was all about the music. It’s so much fun to return to a format that, once again, allows Steve and I to take turns playing songs, and take requests.”  Kirk added “Not only has the music, the mood, and the style from that era never gone away, it’s also finding a new audience, and the boys are back in town to invite everybody to the party!” 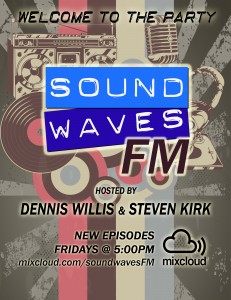 The news about Soundwaves FM is the latest in a series of announcements to coincide with the entertainment brand’s anniversary on March 30th. Previously, Soundwaves announced the addition of Bay Area veteran Peter Finch to the website. Finch’s segment, The Finch Files, will also appear on Soundwaves FM.

According to Willis and Kirk, there are still more projects to announce. Stay tuned!

About Soundwaves:
Soundwaves is the award-winning music program that ran for 25 years on Bay Area television stations. The weekly show – hosted by Dennis Willis, with Steven Kirk and Joe McCaffrey, has welcomed a diverse ensemble of hosts and performers, shooting all over the world, with episodes taped in Hollywood, Las Vegas, Chicago, New York, Hawaii, Mexico and Canada. The program began as a live after school music request program and grew into a location-based, rock ‘n’ roll music video format. An annual spin-off, Soundwaves Xmas, is a televised concert special that has raised food, toys, funds and awareness for dozens of Bay Area and national charities since 1989.

About SoundwavesTV.com:
SoundwavesTV.com, is the leading music lifestyle website, with interviews, articles and segments that celebrate the music video generation.  It is a fan party destination which offers a unique online platform for fans to enjoy and celebrate music videos.  Soundwaves.TV.com is the home of the long-running award winning TV series Soundwaves.