More in On the Road Again:

A few weeks back, news came down that a band going by “The Notorious Wilco Brothers” would be playing San Francisco’s teeny venue The Independent. Since I knew Wilco would be playing this weekends Outside Lands festival and since there was a crudely designed photoshop of the band Wilco hanging out of various windows on the “The Notorious Wilco Brothers” email flyer, I used my powers of deduction to figure out “The Notorious Wilco Brothers” was in fact the band Wilco doing a “secret” show before their main gig in Golden Gate Park. I even managed to score tickets on the day they went on sale via the Internet which is no small feat for popular shows these days.Before I go on, I should mention Wilco is probably my favorite band ever. If you’ve never heard of them, they’re really hard to describe. Their leader is Jeff Tweedy who started out in the seminal Alt-Country band Uncle Tupelo. After a somewhat infamous falling out between him and Uncle Tupelo co-founder Jay Farrar, Tweedy started Wilco while Farrar started the band Son Volt. Everyone guessed Son Volt would become a huge band while Wilco would kind of idle around (this was based on each bands debut album) but nowadays Wilco plays sold-out shows across the world and Son Volt plays off nights in Petaluma. 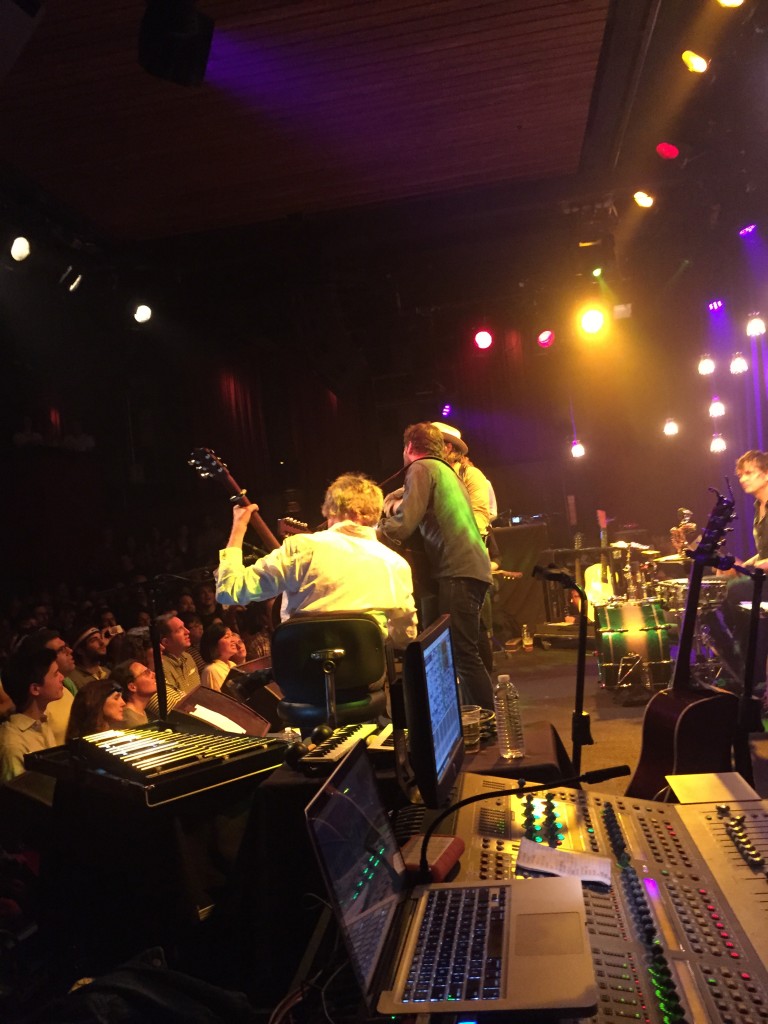 Since their very alt-country/Americana debut album A.M. in 1995, Wilco has managed to recreate themselves over and over again soundwise by at first having a kind of rotating lineup headed by Tweedy and key collaborator Jay Bennett who many credit with the bands critically acclaimed albums “Summerteeth” and “Yankee Hotel Foxtrot.” However when Tweedy decided to get sober, he booted Bennett from the band (Bennett later died due to drug use) and rebuilt his group once again with a lineup that’s been in tact for about ten years. This one features Tweedy as well as sole surviving member of the original lineup, bassist John Stirratt and (IMHO) the best drummer out there today, Glenn Kotche. Adding depth to the bands unique sound are multi-instrumentalist Pat Sansone and piano/computer sound guy Mikael Jorgensen. But the glue of the band is Nels Cline, for my money one of the most brilliant guitarists of all time. I could go on and on about his amazingness but let’s get to the review of “The Notorious Wilco Brothers” August 6 at The Independent.I arrived just as opening act Vetiver was finishing up and The Independent was packed. This is no big feat since the venue holds around 300 people and Wilco regularly sells out Bay Area dates at the Greek in Berkeley. I had forgotten how truly small The Independent is and immediately got excited at the prospects of what Wilco would bring in such an intimate venue. With Wilco, you never know what they will play. They’ve recently been playing the entirety of their newest album Star Wars (which they released free to anyone who wanted it a few weeks back) followed by more classic Wilco tunes. I’ll admit, this caused me some pause as I’m not fully into Star Wars quite yet and while it’s growing on me, it’s not in heavy rotation. But when the band hit the stage with a stripped down look as far as equipment goes, the plot thickened. 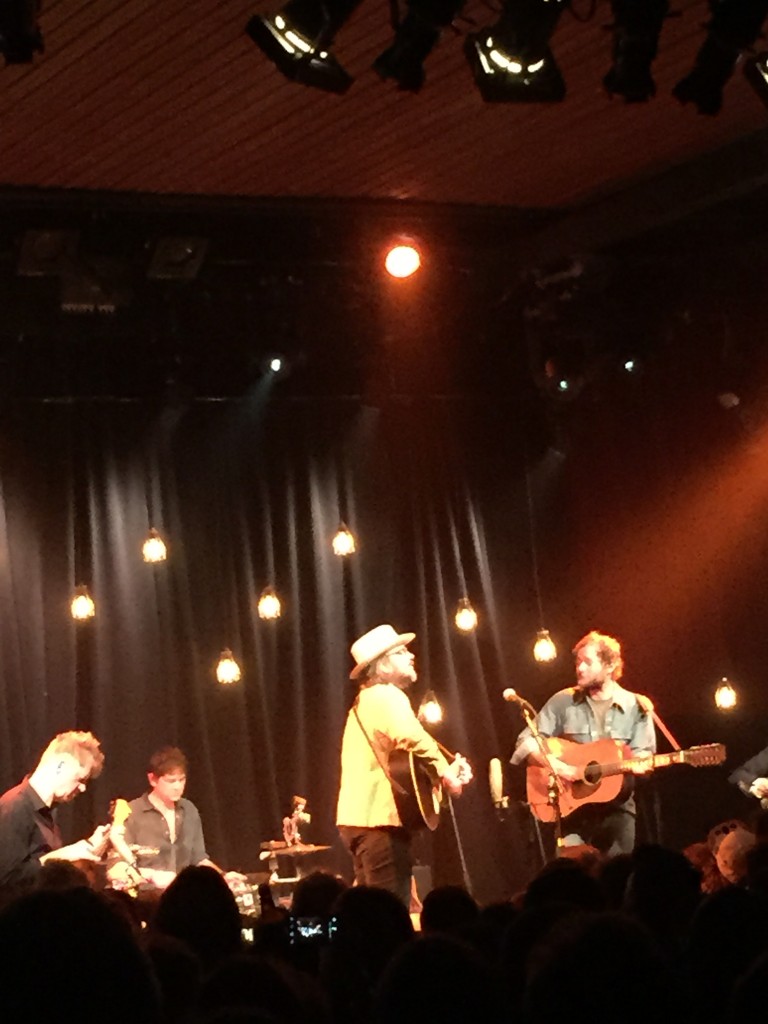 The band opened with the dark, dour and lovely “Less Than You Think” off their 2004 album “A Ghost is Born.” The song set the stage for what would be a very, very quiet show that was completely acoustic. I’ve probably seen Wilco over 30 times in various iterations but I’d never seen this lineup play an acoustic set. Plus, with maniacal players like Kotche and Cline, I wasn’t sure how it would come off. As a diehard fan, I was blown away by the end but can willingly admit, not everything worked. This was a show for diehard fans to hear new, pared down spins on the bands entire library.As Tweedy wound down the opening song he and Stirratt teamed up on harmonies for “Wasn’t Born to Follow,” their cover of the Byrds song that was also a nod to the Notorious Wilco Brothers” moniker they were playing under. The fact these two have shared a mic for over 20 years was evident, to say the least and their harmonies sounded great. From there, it was all Wilco until the end with selections running the gamut of their career. As mentioned, not everything clicked, particularly the newer songs as they are very densely layered on record and have pretty heavy production which is typical of the band. The complete set list is below but I’ll skip around a bit to note some points of interest.

Sansone brought out a banjo (which I didn’t even know he could play) for the fourth song of the set, a stripped down version of “Random Name Generator” off the new album. While parts of the song found their groove others came off sounding a bit twerpy and twee compared to the muscle of the song as we know it. This was followed by “The Joke Explained,” also off of Star Wars but then the band started taking fans on a tour of their catalogue starting with a solid version of “War on War” from their masterpiece album, 2002’s “Yankee Hotel Foxtrot.” This was followed by the typically electronic-heavy “Bull Black Nova” which was interesting acoustic but the band really came together as the set veered towards older songs that leant themselves more towards a dialed back, acoustic sound.

It’s important to note here that when I say this show is “acoustic,” I mean nothing was plugged into an amplifier. None of the instruments (save maybe Nels Cline’s lap guitar) were plugged into amps and were played directly into microphones on stage. In fact Tweedy himself was a good two-feet away from his mic when singing throughout the entire show giving it an almost acapella feeling and the sound was amazing. However in typical modern times, many people at the show had a hard time shutting up and listening. The Independent is indeed a fine venue but perhaps a seated theater would have been better suited for such a quiet show. Everyone had easy access to the bar and as the show wore on, liquid courage made for lame song requests and bad sing-a-long moments. While I can’t guarantee it, I don’t think the drunk guy next to me singing along to the bands lovely song “Hummingbird” added heretofore unnoticed depth and nuance with his vocal stylings. At one point Tweedy himself leaned down to a fan and pointedly said “Shut up man! Be happy with what you’re getting!”

But overall, the show was a terrific experience and the band seemed to be having a blast playing stripped down for slightly over two hours. News Cline and Glenn Kotche were eventually allowed to unleash their genius on the crowd, the former of which could shake a fuzzy dice-cup and make it sound like it was always meant to be a percussion instrument. He probably has. I was also thrilled that both Sansone and Jorgensen brought out the melodic (basically a keyboard you blow into) as it really helped add depth to some of the denser songs. Sansone also went back to the banjo several times throughout the night.

Highlights of the set included John Stirratt’s rare vocal starrer “It’s Just That Simple” off the bands debut album “A.M.,” “Forget the Flowers” from the double-disc “Being There,” “Whole Love” off the album of the same name and the Uncle Tupelo classic “New Madrid.” As has become the norm for closing out shows here in the Bay Area the band tried to end the set with “California Stars” which is one of the bands very best songs ever and can be found on their collaboration with Billy Bragg, “Mermaid Avenue, Volume 1.” Thaty album and it’s two follow-ups are all previously unrecorded songs written by Woody Guthrie, brought to life by Bragg and Wilco. Just as the band was about to leave the stage after their encore Tweedy strapped on the acoustic for a nicely done version of “True Love Will Find You In The End” which was originally done by Daniel Johnson.

Truly a wonderful evening for this Wilco fan I’ve suddenly become bummed I didn’t scoop up tickets to see them at Outside Lands. Then again, I think seeing my favorite band with 300-odd other people is better than seeing them with 80,000 plus.