Listen beyond the hits and discover weird, wonderful alternate versions of your favorite songs.

By the time he took the stage at Live Aid, British crooner Paul Young was already an international superstar, and was starting to conquer the upper echelon of the US pop world. Despite a minor hit in 1983 with “Come Back and Stay,” Young scored his big crossover with “Everytime You Go Away,” a soulful ballad that became the de facto theme for every single high school prom for the next two years, and was single-handedly responsible for a brief uptick in the rate of births in the mid-80s.

At the very same time Young’s baby-making opus was blasting it’s way to #1 on the Pop and Adult Contemporary charts, way down at #30 was Daryl Hall and John Oates’ fourth single from Big Bam Boom, called “Possession Obsession.”

But Hall wasn’t mad, he was glad! See, the way the music industry works is like this: if you write a song and someone else performs it, you get paid! And if that song sells half a million copies, you get paid a lot.

Even though Hall made a small fortune off Young’s more popular version, it still must have chapped his hide that the good-looking Brit was the one to make his mark with the tune. 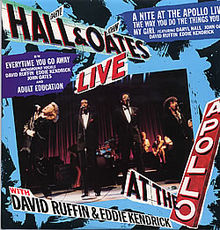 Later that year, Hall and Oates released Live at the Apollo, which featured two tracks with Temptations David Ruffin and Eddie Kendricks, and just five of their own songs.

Nowhere to be found: huge hits such as “Out of Touch,””You Make My Dreams,””Maneater,” or ”Method of Modern Love.”

But right there on side one? You guessed it.

And as opposed to just play the damn song, Hall dickishly introduces it by dismissing Young as “an English artist.”

Too harsh? Don’t cry for Hall. He continued to make money off the song, not only by insuring it never leaves the duo’s concert lineup again, but because it was covered by Blue Room for the film Planes, Trains and Automobiles.

In short, Daryl Hall is a goddamn musical legend and has given the world one of the greatest music shows ever produced.

Just don’t ever have a bigger hit than him, because he can’t go for that (no can do).