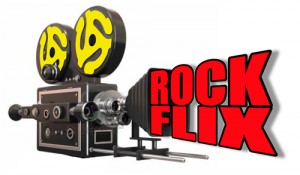 For a lot of people and a lot of different reasons, the ‘80s was a happy time, full of feel-good, sing-it-loud songs, including Paul Simon’s “You Can Call Me Al.”

While it was the first single from Simon’s critically acclaimed “Graceland” album, it only reached No. 44 on the Billboard’s Hot 100 on its initial release in October of 1986. Warner tried again, re-releasing it as a single in March of 1987 where it landed at No. 23.

The infectious fun of the song and the accompanying simplistic silliness of the music video, added with the fairly heavy rotation on MTV, helped make this one of the quintessential songs of the ‘80s.

WHAT’S IN A NAME?

The names for the main “characters” in the song, Al and Betty were inspired by a real-life event. Simon and his then-wife Peggy Harper were at a party also attended by French conductor/composer Pierre Boulez. Throughout the evening, Boulez mistakenly referred to Paul and Peggy as Al and Betty. The in-joke names later resurfaced in the song.

YOU CAN CALL ME CHEVY

The video we’ve all come to know and love was actually the second video produced for the song. The first video was culled from one of Simon’s numerous appearances on “Saturday Night Live.” Simon wasn’t overly enthused with the idea of using the live on stage version for the official video, so number of heads came together, including SNL executive Producer Lorne Michaels. The concept of Chevy Chase, who towered over the diminutive Paul Simon, would lip-sync the lyrics as Simon became the back-up band was born.

NO MATTER HOW YOU SLICE IT

The groovy bass run Simon performs in the video ain’t all it’s cracked up to be. Actually, it’s only HALF what it’s cracked up to be. Performed on the single by South African bassist Bakithi Kumalo (a musician who also worked with artists as diverse as Cyndi Lauper, Harry Belafonte and Gloria Estefan), the riff was actually cut in half, then played backwards, creating a musical palindrome.

The Album, “Graceland,” would go on to win the Grammy for Album of the Year in 1988.

p.s. Lest you think we don’t practice what we preach around here, please enjoy this photo of Soundwaves’ own Dennis Willis and Steven Kirk singing along back in the day at Video Plus in Pacifica, Ca. 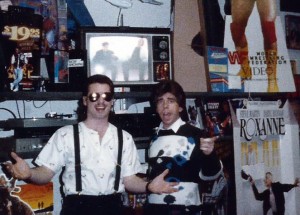