HUEY TUESDAY – a weekly dig through the archives of the only 80s band more interested in workin’ for a livin’ than being hip. But for every monster pop single, there was a deep album detour into new wave, ska, blues, reggae, a capella and instrumentals. Hip to be square, indeed! Have you really heard the News?
* * * * *

The boys didn’t do many covers.

Well, except for the entire albums Four Chords and Several Years ago and Soulsville, but that’s another subject. On their own original albums, the News mainly stuck to originals.2000’s Plan B was the band’s first new collection of songs since 1991, and to be fair, there wasn’t much of a marketplace left for them. Plan B featured a handful of instant classics that became staples at live shows, and a number of oddities (really, a duet with Wynonna?) 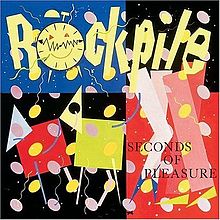 But right there at track #4 was a gleaming gem of a song that was the quintessential Huey Lewis pop song (strong hooks, catchy chorus, chugging rhythm). And we might just have Carlene Carter to thank for it.
“When I Write the Book” would not have been out of place on Sports or Fore, but it’s origins go back farther, and across the pond.

The song was originally recorded by Rockpile – the band that introduced us to Dave Edmunds and Nick Lowe – on the album Seconds of Pleasure (1980).
So where does country artist Carter come into this? Well, her 1980 album Musical Shapes featured an impressive list of session players, including Lowe, Edmunds, Billy Brenner (from Rockpile) … and Sean Hopper, the News’ keyboard whiz.
CLICK TO LISTEN: