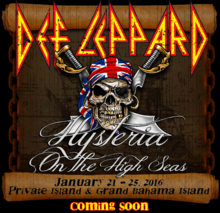 Look, I know it’s really not polite to laugh at the misfortune of others but sometimes, things are just really, really funny even though there’s some crazy and unfortunate circumstances involved. Case in point, the recent Def Leppard rock cruise. The short story is fans of Def Lep paid top dollar for a cruise in the Bahamas with the band and while it would be unfair to say “everything that could go wrong on this thing did,” it’s not far from the truth. And since no one will tell it better than this guy who was actually there, I’ll now spend the next 2 paragraphs using Def Leppard song titles and lyrics to highlight what went awry…

As passengers were invited step inside, walk this way aboard the boat, they discovered the cruise ship company had only partially sold out the ship to Def Leppard fans. No Foolin’, regular cruise goers were told Let’s Get Rocked and many a nose was turned up as these non-rocker folks just weren’t Armageddon It. Nonetheless the ship set sail and at the very first night of concert madness, Def Leppard singer Joe Elliott got acute laryngitis and couldn’t sing. Have You Ever Needed Someone to sing in your band for you? Joe did and luckily some other bands were on the tour to fill in (including Kip Winger of Winger and Eric Martin of Mr. Big!)

From there this got to the point of where Love and Hate Collide as the weather turned sour and scary old 80’s chicks got Hysteria as they clamored for a Photograph with their favorite bands. Alas the cruise would not be left High and Dry but one man was Two Steps Behind. That being the bassist for one of the other bands, “The Last in Line”, who was found dead in his cabin. How’s that for Bringing on the Heartbreak? Sigh, good thing they weren’t on a Rocket!

So, that’s how it went down. In lieu of flowers, fans are asked to Pour Some Sugar On Me.

I’ll be here all week…please, try the veal and don’t forget to tip your waitress!