Sir George Martin, the legendary “Fifth Beatle” who produced virtually all their songs, has died. He was 90.

It was Martin’s choice to not single out a frontman and suggest they replace Best. Enter Ringo Starr.

Their first single, “Love Me Do,” peaked at No. 17 on the British charts. 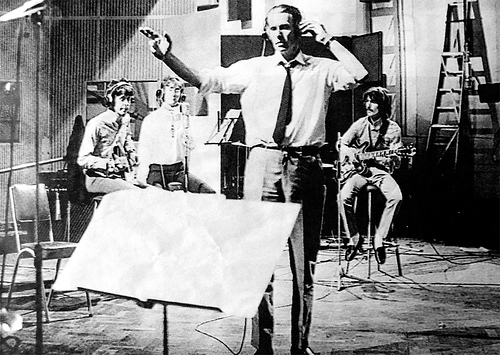 For The Beatles’ first U.S. single, “Please Please Me,” in November 1962, he convinced the boys to speed up the tempo. It proved to be a smash hit. “Gentlemen, you have just made your first No. 1 record,” he memorably told them from the control room.

Martin also served as The Beatles’ arranger. He suggested strings be added to “Yesterday,” which would become one of the most covered songs of all time, and conducted the string section for “Eleanor Rigby.” He played piano on “In My Life” and composed its harpsichord section; was responsible for the breathtaking orchestral windup in “A Day in the Life;” and used backward tapes to help shape the psychedelic elements of Sgt. Pepper’s Lonely Hearts Club Band.

Martin received an Academy Award nomination for best music, scoring of music, adaptation or treatment for The Beatles’ 1964 classic film A Hard Day’s Night, directed by Richard Lester; arranged the score for their 1968 animated movie Yellow Submarine; and scored, with Paul and Linda McCartney, the 1973 James Bond film Live and Let Die.

Martin’s work with McCartney also included producing his albums Tug of War (1982), Pipes of Peace (1983) — which featured McCartney collaborations with Wonder and Michael Jackson — and Flaming Pie (1997). Along with his longtime engineer Geoff Emerick, Martin oversaw post-production on an eight-track analog-mixing desk for platinum-selling compilations like Live at the BBC and Anthology, which featured unreleased songs “Free as a Bird” and “Real Love.”

Martin was knighted in 1996 (a year before McCartney received the honor) and inducted into the Rock and Roll Hall of Fame in 1999.

In 2006, Martin and his son Giles remixed the Beatles catalog for Love, the celebrated Cirque du Soleil production.

In 1997, Martin rerecorded Elton John’s “Candle in the Wind,” originally written by John and Bernie Taupin about Marilyn Monroe but retooled as a tribute to Princess Diana. The song became the second best-selling single in history, and Martin called it “probably my last single. It’s not a bad one to go out on.”