And when we say “classic,” that doesn’t mean the movie was necessarily good, but has endured the test of time. Sure, maybe it’s one of the greatest flicks ever … or maybe it’s a movie that’s so awesome that it should have endured. Either way, consider the next two minutes of your life as homework for your streaming queue.

Remember when middle school meant getting to ready edgy books that had swearing, sex and violence? Yeah, it’s probably not like that any more. But S.E. Hinton’s holy trinity of The Outsiders, That Was Then … This Is Now, and Rumble Fish looms large. And it had the same effect on legendary filmmaker Francis Ford Coppola, who was fresh off his years-long experience making Apocalypse Now. 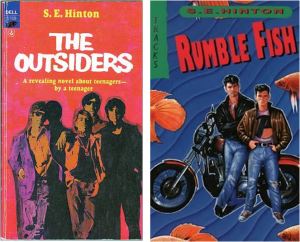 He began an experimental phase: he made two early 80s musicals but in between them were adaptations of two Hinton’s three books. The Outsiders was a moderate hit but Warner Bros. didn’t like an early cut so they cancelled plans for the follow-up.

Rumble Fish centers on the relationship between Motorcycle Boy (Mickey Rourke), a revered former gang leader wishing to live a more peaceful life, and his younger brother, Rusty James (Matt Dillon), an uncool teenaged hoodlum who aspires to become as feared as Motorcycle Boy. The film’s marketing tagline was, “Rusty James can’t live up to his brother’s reputation. His brother can’t live it down.”

Coppola wrote the screenplay for the film with Hinton on his days off from shooting The Outsiders. He made the films back-to-back, retaining much of the same cast and crew. The film is notable for its avant-garde style with a film noir feel, shot on stark high-contrast black-and-white film, using the spherical cinematographic process with allusions to French New Wave cinema and German Expressionism. Rumble Fish features an experimental score by Stewart Copeland, drummer of the musical group The Police, who used a Musync, a new device at the time.

The movie bombed in theaters, but time has been kind to Rumble Fish, which we can see now was a daring approach to a classic work.