Thirty-four years after Kilroy Was Here and “Mr. Roboto” famously strained the concept-friendly rockers of Styx, the band is heading back to the future for their next Big Idea: a trip to Mars on their forthcoming 16th studio album, The Mission.

“The planets truly aligned for The Mission, and I couldn’t be prouder,” guitarist Tommy Shaw said in a press release. “It’s our boldest, most emblematic album since Pieces of Eight.” Keyboardist Lawrence Gowan added, ““The album feels simultaneously comfortable and new. It’s both entertaining and charming, and a natural progression of our sound.” 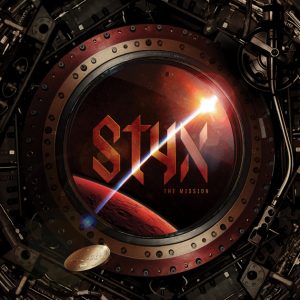 Shaw’s cosmos-themed language reflects the story line that he and producer Will Evankovich created for The Mission. It takes place in 2033 and deals with the first manned mission to Mars via Khedive, a nuclear-powered spaceship, underwritten by the Global Space Exploration Program (GSEP). The three singing members of Styx — Shaw, James “JY” Young and Lawrence Gowan — play the roles of the Pilot, First Officer and the Engineer, and the other three — Chuck Panozzo, Todd Sucherman and Ricky Phillips — serves as the ship’s crew.

Not only did Styx fans have no idea the album was percolating – most of the band was kept in the dark as well.

“It’s been kind of secretive from the very beginning,” Shaw told Billboard. “Will (Evankovich) came up with this song called ‘Locomotive,’ and then I wrote some parts to it and some more lyric and we demoed it out and suddenly it started feeling like a story of some kind. It didn’t take long for it to feel like this should be for Styx.”

Before long, the songs evolved into a thematic song cycle about the first manned mission to Mars.

“We kinda snuck around for a long time,” Shaw acknowledges. “The idea of me coming to everybody else and saying, ‘Look, Will and I have an idea for us to do an album about a mission to Mars’ wasn’t something I could confidently go in and talk about. I think everybody might have been overhearing little playbacks and this and that and the other and they were getting curious. I’m sure there were some discussions on the bus when I wasn’t around. There finally came a point where it was, ‘Let’s bring everybody in.'”

The Mission will launch June 16th.