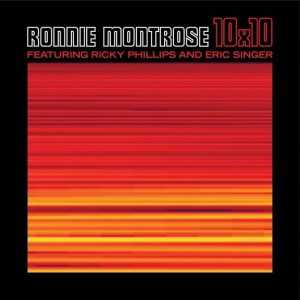 Ronnie Montrose’ dream becomes a posthumous reality with the collaboration of a lifetime.

Available on CD, 180-gram vinyl LP, as well as digitally, 10×10 was conceptualized before his untimely death in 2012. Montrose created the collaborative idea with Rickey Phillips (Styx, bassist) and Eric Singer (KISS, drummer), which will finally be released in Ronnie’s honor September 23rd, 2017.

Ten tracks with ten different vocalists was the well-oriented goal made clear in the title, with Phillips recently stating, “(Montrose’s) songs still have the fire and angst of a young rebel, but with some added wisdom and foresight voiced in his own unique language of ‘guitar-speak.’ On 10×10, we hear Ronnie at the top of his game.”

With artist contributions pouring in from all directions, the final output is a beautifully orchestrated tribute to a fellow artist with an idea that transcends bands, labels, and style, to create a perfectly blended confluence of unity and talent.