Artist | Track | Album
Nick Eng | Too Good For Anyone | Long Shot
Lost Leaders | People Like Us | Promises Promises
The Armoires | (How Did You Make) A Mistake Like Me? | Single release

THIS WEEK’S GUESTS:
This show was one for the books. Completely fun and unpredictable. Another episode with three interviews, and yes, we pulled this off.

First up–Anton Barbeau and Julia Boorinakis Harper returned to the show. Yes, Anton is from here (Sacramento) originally. And yes, he lives in Berlin. And yes, he’s finlly released his long-awaited solo record, Berliner Grotesk. This one is really, really good. It’s piano-based, but rocks hard in the right places, and applies the quirkiness liberally in the right places. As always, excellent songwriting abounds. Anton semi-jokingly calls it the third album in the trilogy, preceded by Magic Act and Natural Causes. It sounds nothing like those two, but it’s an essential piece of the puzzle. You need this one. http://antonbarbeau.com

Postscript to the previous paragraph: Just because Anton has given you an album in 2019, doesn’t mean he’s stopped working on new music. He’s got at least a couple more albums up his sleeve right now, so keep your ears open for that.

In the second hour, we got to meet Gaby Alter. He’s a noted composer who’s written off-Broadway musicals, soundtracks, and even pieces for NPR and PBS. But he’s always wanted to do a solo, folk-based project, and his Yes Gabriel debut EP is the perfect vehicle. Five extremely well-crafted, intimate songs, about relationships and more. This is the music you should have on when you’ve got your favorite hot beverage at your fingertips. We chatted a little about the composing process, and the similarities and differences of writing for a large live audience or for a single headphone listener. Terrific music. www.yesgabriel.com 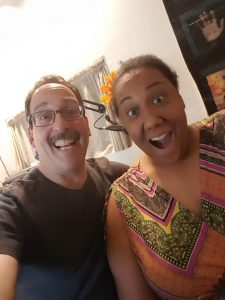 And a little bit later, I was paid a surprise visit by my old friend Bex Francis. She’d been living out of state for about a year, and has returned to Sacramento, where she works on the staff of Access Sacramento, home to KUBU 96.5 FM, doing outreach and membership stuff.

But that would be understating her impact, as she does a lot of work on the television side of the house, as well as acting, voiceover work, and filmmaking.

That last one is big–she recently won the 48 Hour Audience Favorite Award at the Sacramento Film Festival! It’s exactly as it sounds–she and her crew had 48 hours to write, produce, and edit a short film–kind of the indie filmmaking version of the Food Network show Chopped. Talk about total exhilaration–yet she kept it all together, leading her team through the process. We talk about it a bit on the show. http://californiafilm.net/