THIS WEEK’S GUESTS:
This week’s show was kind of epic. It had everything going on: thrills, spills, chills, and Doan’s Pills (old timey reference)! Ok, maybe not all of that, but still, a pretty big show. Lots to unpack here, so let’s take it from the top.

In the first hour, we met NYC-based singer-songwriter Janet LaBelle. We spoke about her exquisite little EP “I Only See You”, and her career as a songwriter in general. She started in the punk-pop band Avery in her teens, but moved into a style that was more suited to showcasing lyrics and her vocals. Her role model for production and arranging is Brian Wilson, and her attention to detail really shines through. Our chat was fun and lively. Check out Janet’s work at janetlabelle.com.

In the second hour, we were scheduled to chat with Christina Bulbenko and Rex Broome of The Armoires and Big Stir Records. They literally released their second album, Zibaldone, the day before, so we wanted to talk about that. But The Armoires and I have an interesting history of phone interviews conducted from inside their car. The last time that happened they were in San Francisco, in the Haight district, and Marty Schneider of Trip Wire just happened by and said hello to them. This time, Christina and Rex were parked outside the site of the IPO (International Pop Overthrow) Festival in Los Angeles, and a couple of music luminaries not only said hello, but jumped into the car with them, and joined the interview, already in progress. So we got to say hello to writer John Borack, and the impersario behind IPO itself, David Bash! The conversation soon took a turn for the sillier–and I loved every second of it!
bigstirrecords.com goldminemag.com/blogs/power-pop-plus nternationalpopoverthrow.com 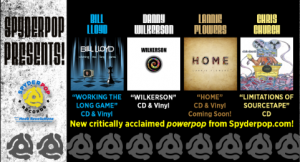 And if that weren’t enough, the third hour brought us a visit with Lannie Flowers and Danny Wilkerson, two of the artists on Arlington, Texas’ Spyderpop Records, ahead of their Sacramento area appearance the following day. Lannie has been the flagship artist for the label for a decade, and is nearing completion of his next album, Home. Last year, Danny released his magnificent solo debut, Wilkerson, which made many year end “best of” lists (Editor’s note: including mine), and is just now starting to perform these amazing songs live. Those two, along with the legendary Bill Lloyd and the great Chris Church, are touring different parts of the country (currently in California), backed by the ace Lannie Flowers Band. We chatted about life on the road, and the current tour. (Editor’s other note: the show on Aug. 4th in Woodland, CA, was magnificent!)
spyderpop.com.

That’s a whole lot of radio show. I hope you enjoy it!